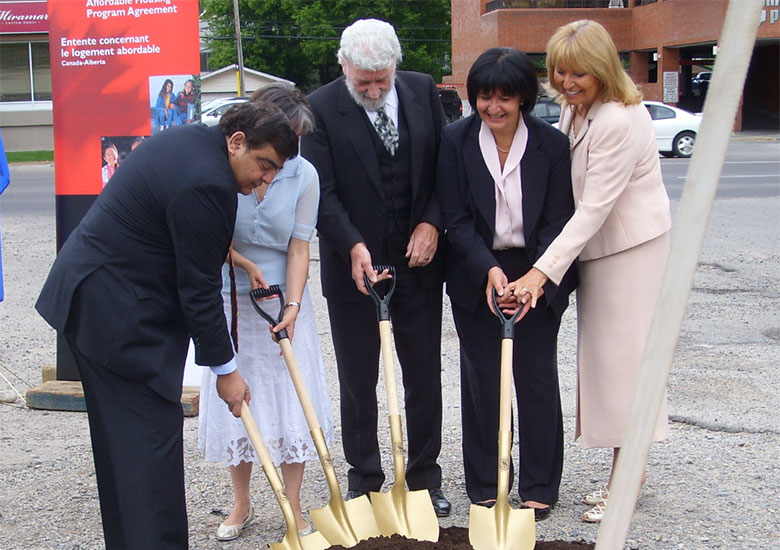 In Memory of Brenda Strafford

The Brenda Strafford Foundation’s Heart Home Network, the HHN, was established in January 1996 (under the name Brenda Strafford Society for the Prevention of Domestic Violence) when it became apparent that there was a dire need in Calgary for long term accommodation and substantial supports for women and children exiting emergency shelters. HHN invited the heads of local crisis shelters and other active community members to form an Advisory Committee to suggest solutions to this pressing problem. In cooperation with the Calgary Housing Company, the HHN opened its doors to families fleeing domestic violence. Throughout its history, the Network has evolved to be one of the largest post-emergency shelters in Canada.

In 2016, our Founder and Chairman Dr. Strafford passed away at the age of 87. He was an active member of The Brenda Strafford Foundation until his final days, leaving a thriving legacy in his wife’s name that is well-positioned to honour his legacy as well. Dr. Strafford loved helping others in need, especially marginalized groups. He was a champion for populations whose circumstances were preventing them from enjoying a quality of life and a level of dignity many of us take for granted every day. That torch has now been passed on to us to carry.

In 2020, The Brenda Strafford Foundation celebrated 45 years of impact. As we continue to build upon the achievements and successes of our past, looking ahead, The Foundation has a promising future that is full of immense potential.

In 2019, the Heart Home Network celebrated 25 years of supporting women and children in the Calgary community. We are incredibly grateful for the continued support of the Strafford family, and the Foundation’s commitment to our Mission, Vision and Values remains true to our guiding philosophy…

The Preservation of Dignity and The Pursuit of Happiness.

As our founder and long-time funder, The Brenda Strafford Foundation was an ideal partner in our joint mission to provide the highest standard of service to vulnerable populations. The merger was incredibly exciting for many reasons; both organizations have been able to widen their networks, create new meaningful connections, and streamline operations to allow for further organizational growth. The day-to-day operations of The Society were not impacted; we continued to provide shelter, housing and supports for women and children impacted by domestic violence. The Brenda Strafford Foundation and Society cooperated during this transition to ensure the highest quality of services for clients, honouring the important roles and contributions of The Society and its highly valued people and stakeholders.

This new development is a significant milestone for both organizations, with the common goal of ensuring sustainability of services and the preservation of Dr. Barrie Strafford’s legacy to serve the critical needs of women and children leaving abusive situations. The merger has allowed us to pursue growth and development opportunities to support our vision of a community free from family violence under the framework of ‘BSF Cares,’ The Brenda Strafford Foundation’s newly developed Strategic Plan for charitable initiatives and social service delivery. Along with our united status, The Society has chosen a new name that better reflects our scope of services and positions us for future growth. We are now known as The Brenda Strafford Foundation, Heart Home Network.

Expanding our Support into Okotoks

We are incredibly pleased to announce that the Town Council of Okotoks approved a motion to transfer 2.3 acres in the D’Arcy neighborhood to Westwinds Communities and The Brenda Strafford Foundation’s Heart Home Network! This parcel of land was purchased in 2019 for the development of affordable and supportive housing in collaboration with non-profit partners. The Heart Home Network has proposed building 42 transitional housing units with common amenity spaces for women and families fleeing domestic violence.

In keeping with our Strategic Plan and associated strategic pillars, Heart Home Network has been engaged in exploring opportunities to expand services to under-served populations and communities. The Town of Okotoks and surrounding rural areas continue to face significant challenges related to gaps in service locally for women and children impacted by domestic violence. We have been truly fortunate to develop a relationship with the Town of Okotoks and are excited to move forward with our plans.

For more information on this exciting news, and to see the official Press Release from the Town of Okotoks, please visit: Okotoks Press Release

“Heart Home Network is thrilled about the possibilities our partnership with the Town of Okotoks represents and the positive impact our collaboration will create in the lives of women and children impacted by family violence. We applaud the Town of Okotoks for their commitment to fostering the creation of a safe, inclusive, and responsive community,” – Executive Director Linda McLean